Tripawds Supporter sites have no ads!
Skip to content

First, let me say that Dakota seemed to turn around remarkably yesterday afternoon. He decided when he’d had enough of being outside and got himself back into the house unassisted. This was amazing because it involves hopping up about a foot from the ground into the house. He has been up and around much more and seems happier and more settled. His appetite is still off, but I’m ok with that because I’d like him to lose a few pounds.

That being said, I think the veterinarian community should take a look at the information they are giving the families of new amputees and perhaps make some slight adjustments. I believe that a vet’s viewing lens into the new life of a tripawd dog is significantly different than the viewing lens of the dog’s family. I also believe that a vet does not want to discourage a family from giving an otherwise healthy dog a new chance through amputation and so perhaps colors the info they give out. In other words (what I’m trying to sidestep around here), I think veterinarians make it seem easier than it is.

I realize many people may either take offense to that statement or disagree or tell me they never experienced that at all. But I did. We were going to do this for Dakota, so we were not on the fence and needing to be nudged toward amputation. I said from the beginning that this was the only chance Dakota had at living a full life. He just turned 9; he’s not a youngster, but neither is he a doddering senior. I have every reason to want to provide him with the chance to live long enough to become doddering. But I feel like I was sandbagged a little on this.

After the surgery, when Dakota was struggling so much and seemed to have no will to do anything, I was really frightened. I was worried, terribly worried. It would have made things so much easier if the folks handling his surgery had just been up-front with me and said “the first few days will suck and he may act like he doesn’t want to go on living, but that will pass.” Instead, I was told over and over again how well he would do, how little time it would take him to be up and attempting to move around, etc. But it wasn’t like that for Dakota. It was hard, it was a struggle and it sucked.

When I contacted the surgeon afterward and told her how much trouble Dakota was having, she then told me how hard it could be. Only afterward did she become candid. She had couched some of her warnings in language that sounded more hopeful, more helpful. I know it’s because they see miracles every day and a dog able to hop around a bit a few days after this major surgery probably seems like no big deal. But it is a big deal. I guess I’m just putting out a request for a little more truth in advertising.


To remove ads from your site and others, upgrade to a Tripawds Supporter blog! 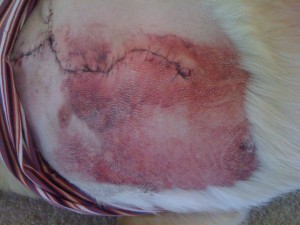 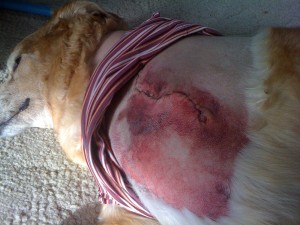 Dakota seemed to be bouncier and perkier this morning. As the morning has worn on, he has acted like his wound area is painful. I’ve been able to gently palpate around the incision without getting any response at all from him, but late this morning he has let me know he doesn’t like it. He was not terribly interested in either supper last night or breakfast today.

The bruising grew overnight, in a big way. I have no idea if this is ok or if he needs to be seen. Has anyone else had bruising like this?

Before bed last night, D urinated again and also dropped a landmine in the yard. I was expecting days of constipation, so this was a nice bonus. So that end seems to be working fine. Hopefully more on the bruising later…

This morning was not good. It got better, but the morning was awful. I think we missed our medication window and Dakota was hurting this morning until his dose kicked in. I have to figure out a way to keep that from happening.

At 11 this morning, Dakota finally urinated and we had a party. It had been over 30 hours and I was determined not to take him in for a catheter. He went outside several times, kept falling down, insisted on just laying down in the snow. He was exhausted just getting out there, and we were helping him. But when he finally peed, it seemed to change him. He must have been almost bursting and felt such relief. No more holding out, waiting for that leg to come back so he could lift a leg to go. Squatting may not be what he wanted to do, but he did it anyway.

Since then, Dakota has made efforts to move around in the house a bit  more. He even chose to expend his energy getting back to his favorite spot, blocking the kitchen doorway. He has stationed himself there for years and it drives us nuts as we trip over him. He paws the air at our feet and we hate it. So he hauled his butt over there again and parked. I think that is a good sign.

This was what was going through my mind after I got Dakota home today. Yes he wanted to be home, and yes there was a significant amount of picking him up and turning him around. He had a pretty difficult time getting oriented.

When I arrived at CSU to collect D, the clinician assigned to him spent a good 30 minutes giving me discharge instructions and information. Turns out that the urination Dakota did last night really wasn’t. His bladder got full, so they expressed it. He wouldn’t drink (no biggie with the IV) or pee for them. I figured if I got him home, he would feel better about marking his own territory. And since he uses a dog door at home, he was probably really wondering why these people were hanging out expecting him to perform publicly.

The ride home was uneventful, though D did a hard face plant into his crate while he was being loaded. After we got him inside the house, he was determined to try to hop around. We watched painfully as he face planted, fell over and refused to lay down and rest. Eventually, I paid him to lay down by giving him a bully stick. He did take a long nap, but it seemed to take forever for him to get calm. I blocked him off with the portable fencing I have, and he barrelled on through it.

We’ve been home now for about 4 hours and he’s been out twice. No pee yet, but lots of water. As I write this, he is doing that funny doggie rumble that isn’t quite a whine. He just had his pain meds and I think maybe he’s hurting a little. I know we’ll all live through it, but I never thought in a million years…

This afternoon, my dog Dakota joined the club. He gave his left front leg to science–literally. Dakota was enrolled in a clinical trial at Colorado State University and they get the cancerous limb. My 12-year-old was so bummed. He envisioned it as the grossest show-and-tell of all time, designed to send his teachers into spasms of upchucking. It was not to be.

Dakota is turning 9 this month, probably on Valentine’s Day, and an amputation seems a pretty crappy birthday present to give to him. On the other hand, we can say he received his 3rd chance, as his 2nd was when we found him dumped and dying and chose to stop the car.

I sit here tonight writing this in a Fort Collins hotel room, hoping I can figure out how to get this dog home tomorrow. And once I get him home, hoping I can get him out of the car, into the house and reintegrated into our family with as little pain and distress as possible. I’ve had an update this evening so I know Dakota appears to be without pain, sitting up and watching the humans around him. I wonder what he’ll dream about tonight. Maybe 3-legged rabbits?


Tripawds Supporter sites have no ads!