Tripawds Supporter sites have no ads!
Skip to content

Dakota is not quite at the 2-week mark and he continues to act like nothing happened. He makes it look easy sometimes. Not always…but when he does, it makes us all smile.

Yesterday I decided to see if Dakota would willingly use his dog door. He’d gone out of it once since his surgery but hadn’t come back in that way. He really did not want to exit through the dog door and I had to force the issue. To please me, he did it and then turned around and watched me through the window. I called to him and he bounced right back in, so it’s obvious that using the door itself is not a problem for him. Unfortunately, there isn’t much flat land out there and he has little room before he needs to go uphill. I think this is disturbing to him. We’re talking about how to make things easier in this regard. Since that hillside is covered in deep, crusty snow, it may not be a comfortable place for him any longer.

This morning Dakota, Evelyn and I walked out front and down the driveway a little way. Dakota peed (much easier for him now that he’s given up trying to lift a leg) and sniffed around, rolled in the snow some, and then was ready to come back inside. His gait was markedly different this morning. He was not using his head to bounce along nearly as much as he had been, and walking directly behind him it was hard to tell that he was missing a leg. He made that part look so easy!

Dakota’s been off pain meds, except for his maintenance Deramaxx for arthritis, for a few days. He’s doing fine. He still sleeps a lot and lays down almost all the time. I don’t know if tripawds eventually sit more or less, stand more or less, or how they really spend their days. This is something we will discover as time goes by. I also wonder when I’ll stop thinking “holy crap! What happened to your leg!” when I look at Dakota. Since it hasn’t even been 2 weeks yet, I know it’s normal to still be startled. But watching him roaming around this morning, he looked just like any other dog. 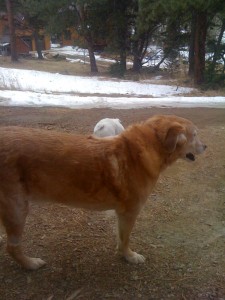 To remove ads from your site and others, upgrade to a Tripawds Supporter blog!

Today is day 10 for Dakota and we celebrated by getting his stitches removed. I wanted to wait a couple of days more, but Dakota had been going to town trying to scratch the awful itch they created, and I wanted to have that abdominal bruising looked at. Turns out day 10 is perfectly fine for suture removal and everything had closed up nicely.

Dakota does have a smallish seroma, which I suspected, but it isn’t large enough to require any treatment. After the stitches were out, there was some fluid oozing in one reddened area so I think it may find its own drain. Sounds nasty, doesn’t it? A couple of days ago Dakota did begin licking the incision and irritated a spot, and this is where the oozing is coming form.

The bruising is ok, although of course no one will commit to saying it’s actually from the surgery. There have been all kinds of caveats issued: It could be a platelet disorder that only last week manifested; it could be internal bleeding from who knows what that just popped up…I don’t think so.

After we got back home, Dakota’s bulldog Evelyn (the worst roommate in the world, remember) tried to snag a bone from his mouth. Evelyn had been left home with at least 5 bones while we were gone, but once we got home the only one she couldn’t live without was the one Dakota picked up. They really went at it for a moment, and I had to intervene. All I could envision was Dakota’s shoulder tearing open and everything falling apart. It was really rather frightening. In retrospect, Dakota now cares if Evelyn wants to steal from him. Several days ago he would probably not have lifted his head to protest.

So the mending continues and I’m hopeful that Dakota will regain more strength every day. He is doing much better outside, avoiding obstacles and not falling down. The worst navigation challenges come from his persistent running into people, especially me. He often doesn’t seem to know what to do with his body and just rams right into my legs. I think he wants me to move out of his way, but I just can’t always do that. He also needs to learn to moderate his speed. I understand why faster is easier for him, but boy is it fast! I’m very sure he can slow down a bit and still keep up good momentum.

Now the challenge will be to keep Dakota quiet for another week so the seroma can resolve. Oh yeah, and he absolutely can’t keep licking at the incision, either. I guess he’s still going to be modeling some tasteful duds for the next week or so.

Dakota officially has an ampuversary! Today I cut down his Tramadol dose to try to get him to perk up a bit. I think it worked. He was more involved and went outside more, once at his request. On the other hand, he also had some times of pain when he yelped at being touched near his incision. That’s new. Before today, being touched or even bumped slightly didn’t elicit a response. I guess it’s all about balance. If he has a tolerable amount of discomfort only when the area is touched, then I think that’s ok.

Dakota also developed what looks like additional bruising in his abdominal area, from his ribs down to his groin. He is very, very furry so it’s kind of hard to see without shaving him, but his skin is a livid fuchsia, just like an awful new bruise. I called one of his doctors and she said that it is normal for bruises to sometimes spread and migrate great distances, as long as the area doesn’t seem painful or swollen. Suture removal had been scheduled for Wednesday, but I moved it up to Monday so he can be looked at sooner. Since today is Friday, I think that’s prudent.

Overall, I think things are improving. I wish Dakota could already be pain-free, but this is just something he will have to get through. He wags a lot and his appetite is improving, and he peed 3 times today, which is a biggie.

I will update again after suture removal on Monday, unless there is something extraordinary to report before then. I am going to relax and enjoy my weekend with my family and my buddy Dakota.

Tomorrow marks a week since Dakota had his surgery, and his lab results finally came in this morning. Just as we expected, grade 2 soft tissue sarcoma. Lymph nodes are clear, which is very good news because it means we don’t have to make the chemo decision. The recommendation now is chest radiographs every 3 months for the first year and twice yearly after that. Everyone is incredibly pleased about the results, including Dakota.

We are also slowly finding our normal around here. We have another dog, a bulldog named Evelyn. She really belongs to Dakota and I say she is his bulldog baby. This morning I was playing with her and Dakota shut it down. He hadn’t given permission for horseplay, so we had to stop. I hate it when he interferes like that, but on the other hand he actually cared this morning. So even if his normal is obnoxious, it’s his normal. Normal is pretty good right now.

Our other mini-struggles that remain are getting D to eat and getting him to pee. Eating is coming along as long as I’m willing to shell out for the expensive fresh food that comes in a tube. That won’t go on forever and the weaning will begin shortly. Peeing is a bit harder because I have no control over it. This morning Dakota showed me that his discomfort over finding a place to pee is all around that leg lift. He really wants to lift his leg and he can’t. So instead, he waits forever and goes about once a day, or once every 30 hours. I don’t like this but I can’t control it. This morning he got as close as he could to a small spruce tree and peed a few inches away from it. I imagine he will shortly learn to lean on a tree and wet it down.

Stitches are scheduled to come out next week on day 12 or 13, and then he can take off his clothes and run around naked again. Woohoo! I’m sure he can hardly wait!

Last night, Dakota was a naughty boy. He did too much. First, he took a prolonged stroll around outside, looking for a satisfactory place to do his toilet business. I don’t understand what the ritual is with this, but I know there is one and it is often convoluted and lengthy. You’d think that a dog with a million stitches in them wouldn’t feel like rejecting so many toilet spots, but I guess they do. It was apparently extremely important to Dakota to get this right. But it took forever, with him hopping around the yard the entire time and post-holing through 4 inches of frozen, crusted snow and inspecting every possible spot. He fell frequently, but I didn’t interfere.

Shortly after coming inside, I had to go outside and shovel out the gate to my dog yard. The same frozen, crusted snow Dakota was falling in was preventing me from closing that gate so I had to shovel it clear. While I was doing that, the dog door opened up and who should bounce out of it but Dakota! I was  not sure this was a good idea at all because our dog door is in a funny spot. To exit from the house requires the dogs to step up. Because of all the mud that they bring in from outside, my husband put in a slatted deck outside the door to catch the dirt. This makes it a bit awkward for a 3-legged dog, though.

So now Dakota had made it outside, but where he exited is a long way from the front door. I had no harness, no sling, no nothing. Just a dog on ice–literally. He managed to hop all around the icy outside of the house, though, and make it to the front door. He had to skirt a low retaining wall and switchback around it, but he did. Then he pogoed up the driveway, up the walkway, up one step onto the stoop and up the other step into the house.

Today, Dakota is paying for his gymnastics with a 10-hour nap. He’s happy, wagging and occasionally looking around. But he’s mostly sleeping. Naughty, naughty doggie.


Tripawds Supporter sites have no ads!