I am 10 1/2 years old and I don’t play. I have never played with toys. I have never chased a ball. I think a whole lot of years ago I halfheartedly ran after a stick a few times, but when I got to it I thought “What’s the point?” and broke off the chase. I think I was filled with teenage angst or something. My Boy says I’m emo.

But tonight, I played! And it was fun! My Woman was hiding in the office on her hands and knees (like a moron, really) and acting like she was going to get us. She was whacking the floor and then ducking back inside the office. Evelyn was acting like an idiot, of course, thinking this was grand. But guess what? I suddenly had this irristible urge to join in. I started yipping at my Woman when she peeked around the doorway. I used my most annoying yip. Then I started wagging really hard and couldn’t wait for her to peek around the door again. It was really rather delightful!

The Woman started singing the Goofy Goober song from SpongeBob, and I wagged again. I just couldn’t help myself. So I guess we’re all idiots around here tonight. And it was fun! When we stopped all the nonsense, I did my combat crawl over to my Woman and we snuggled. That was nice, too. Until she said I don’t smell so good and need a bath. Maybe tomorrow I can find something dead outside and fix that. Just for her.

Shari here, taking the wheel from Dakota for a minute. This is what we come home to whenever we’ve been out. Every single time. Dakota can be a royal PITA at times with his quirks and fears and oddities, but when I come home and this is the first thing I see it can almost bring tears to my eyes.

Well, when they stopped the car and brought me into the car and into their lives, I wanted to do something in return. I can’t do much but I can watch. I can wait. I can let them know that the most important thing to me is when they open that door and come back. That’s all.

This is your dog. 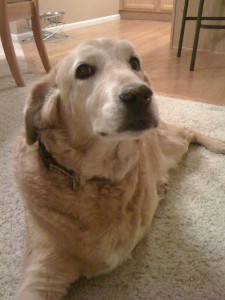 This is your dog on drugs. 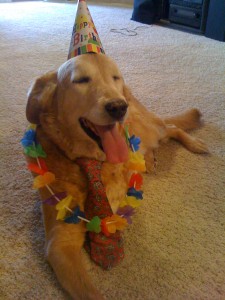 And this is your dog on drugs after surgery to remove a tooth that was broken off by the worst roommate in the world. 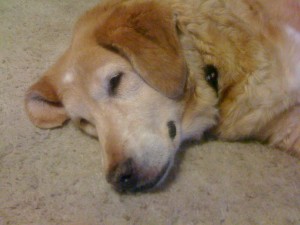 I am ok. I am on drugs. I am too wasted to write more. I will write more later. That is all.

My Woman wrote in the forums here about my roommate Evelyn. She had some weird stuff going on and it seems to be this funky head tremor syndrome that bulldogs sometimes have. All the stuff on the interpipes says it’s harmless and the dog doesn’t hurt and so forth. My Woman is taking Evelyn for a bloodletting just for fun (she says it’s “to be sure Evvie’s ok”) next week. And Evelyn only did it once yesterday and none today, so she seems perfectly fine. I think she was faking anyway.

Now here’s where it gets funny. I also have a Man, you know. This Man does not know it, but he is wrapped around Evelyn’s little spotted paws so tightly that she twitches and he comes to see what she needs. She is such a princess, even if she is an ugly one that snores like an SOB. Whatever that  means. So yesterday my Man and my Woman went to a store. It’s called a hardware store but it’s really not. It’s so much more. It’s kind of like Christmas in a store. I know; I’ve been there.

In this store, my Man was buying something called bolts. Whatever. While he was getting them, he apparently told my Woman to go to their fancy-schmancy dog section (and it’s amazing and huge) and get some dog treats to make Evelyn feel better. My Woman told me this later. This is what she said: She picked out a box of dog cookies and then my Man asked her why she was being so stingy with one measly box. So he picked up another box. And then–this is where it gets good–he picked out a package of (wait for it)…dehydrated ostrich liver! Have you ever? Me neither!!! And damn, these were good cookies! Not that cheap crap she usually buys. These were high-class crap!

When they got home, I pulled my Woman aside and asked her about the shopping spree. She’s not usually like that. But he is. My Man loves to buy us goodies. She told me all this. I asked how much it cost. She said “don’t ask.” Ha! And all because they feel so bad for the poor widdle bulldawggie that has the head bobbles! Suckers!