Barney has been called away on a super-secret, double-ultra-important mission. He was going to stay another day but my Woman said duty calls. She said Barney is some kind of secret agent man and he is needed elsewhere–P*R*O*N*T*O. So Barney was crammed into his box and he’s flying away in the morning.

Barney stinks. He really does. I found his scent…compelling and interesting. Evelyn found it intoxicating.  Photographic proof below. 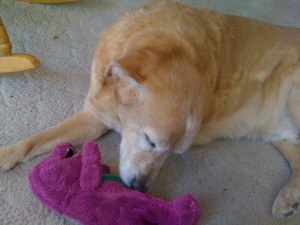 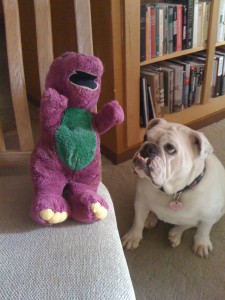 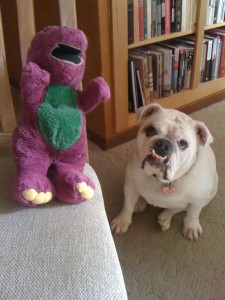 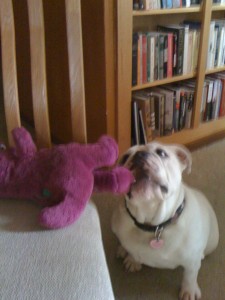 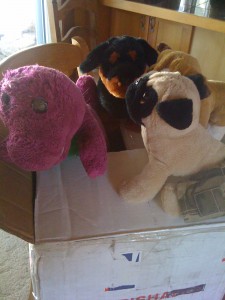 As we crammed Barney into the box, all of his Blackjack friends showed up to send him off. Puku, Oscar and Bandit hopped up there and did whatever it is that compulsive gamblers do when they say goodbye.

My assessment:  He’s a pain in the butt, no doubt about it. I hope he makes up for the riot he caused here. Funny thing. We were supposed to kill Barney but instead Barney made me a little nuts.  I ate Evelyn’s head and made her bleed a little. I say good riddance, purple creature.  So long, schmuck!

We paid Barney back for inciting a riot the other night. First my Woman put a sweater on him. It came from Angel Catie Catelyn and was sweeter than Barney, that’s for sure. We made him go out in the yard and cut down our Christmas tree! And my Woman gave him a Swiss army knife to do it. I hoped he’d cut his femoral artery or his jugular, but no such luck. I picked the tree. It was so big because I wanted him to be out there for a very long time. He was. He was gone overnight.  Here is the tree: 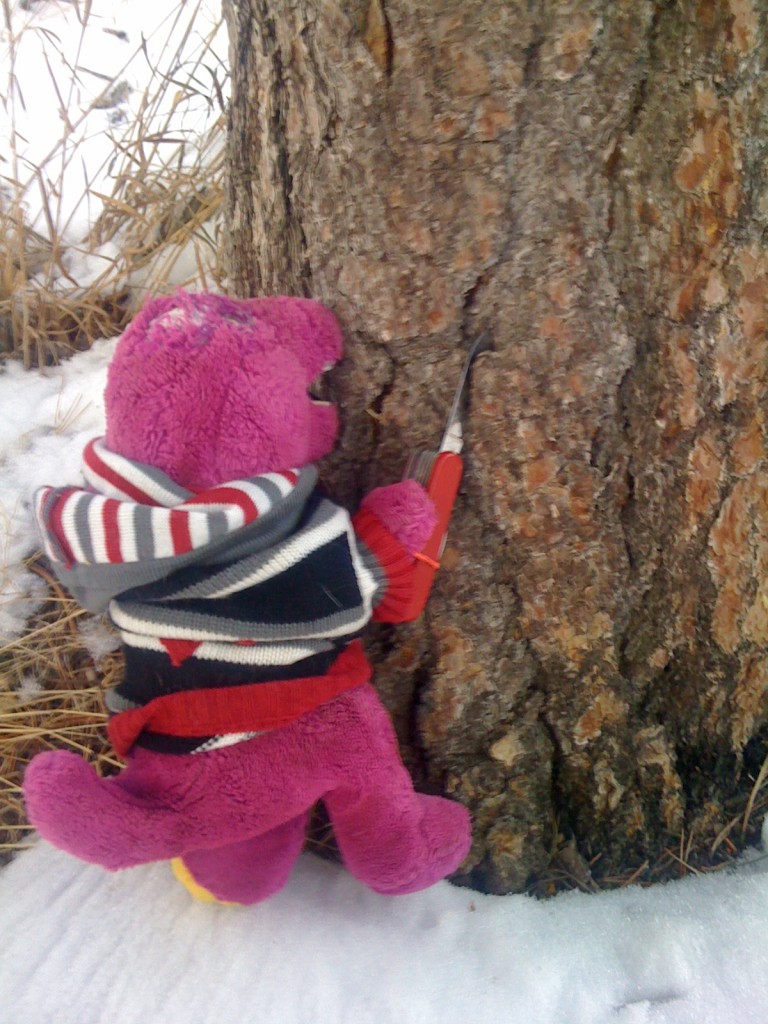 Then just to be a smartass, he cut down another tree and stacked it for splitting next summer. 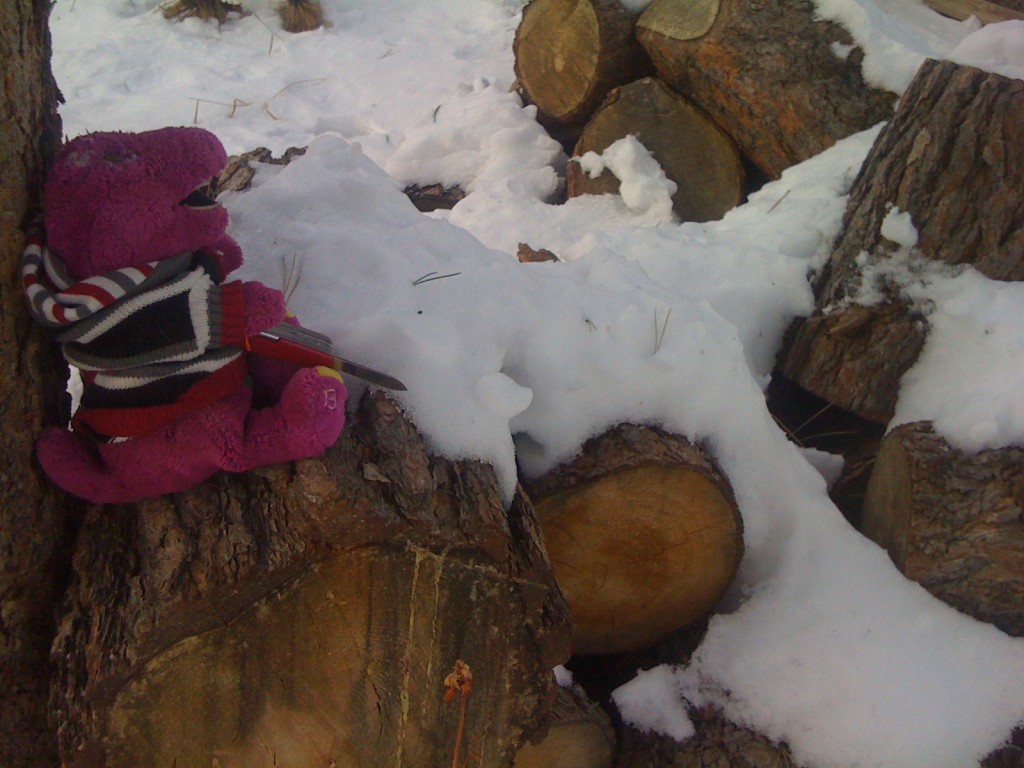 We made Barney haul the tree to the house. He had to trim off some low branches. 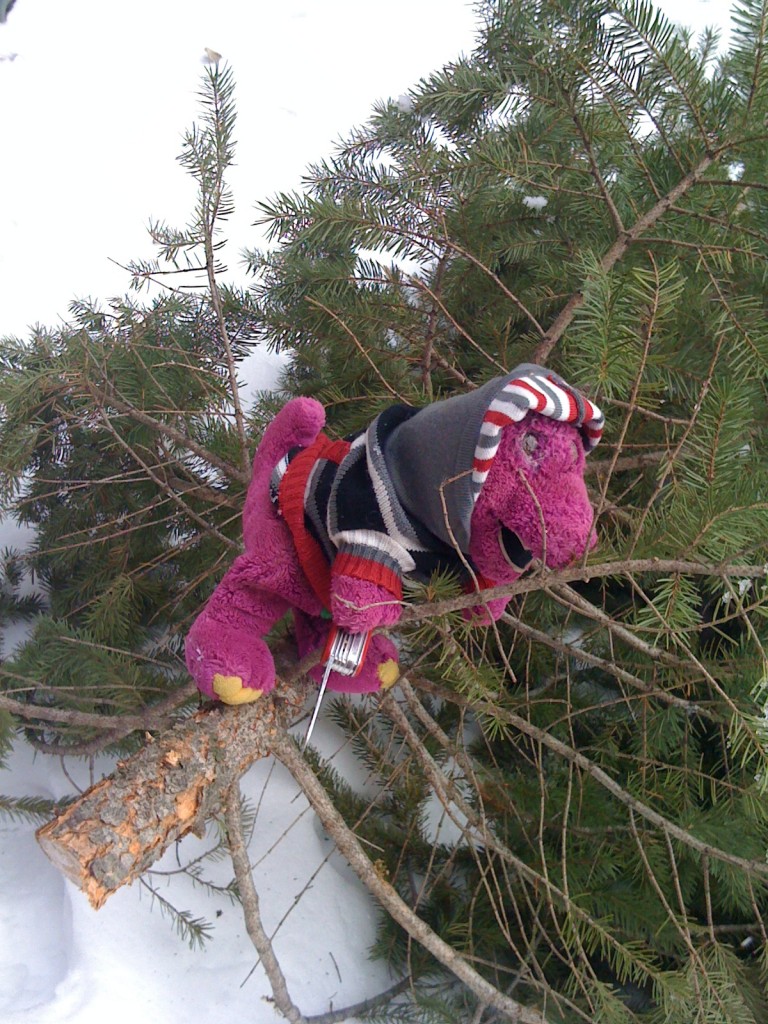 After Barney brought the tree inside and made my Woman a hot buttered rum and massaged my feet and rubbed Evelyn’s belly, he got a little rest. My Woman went potty while I dozed off. He took advantage of the moment to make more trouble. 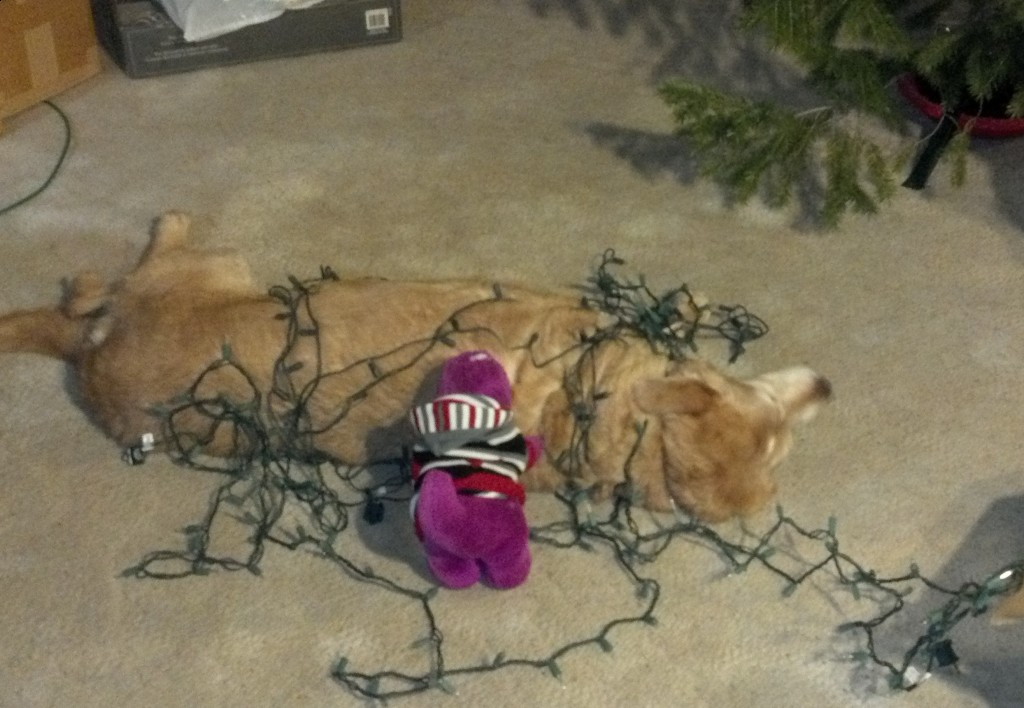 I let him have it, though. I’m faster than lightning! 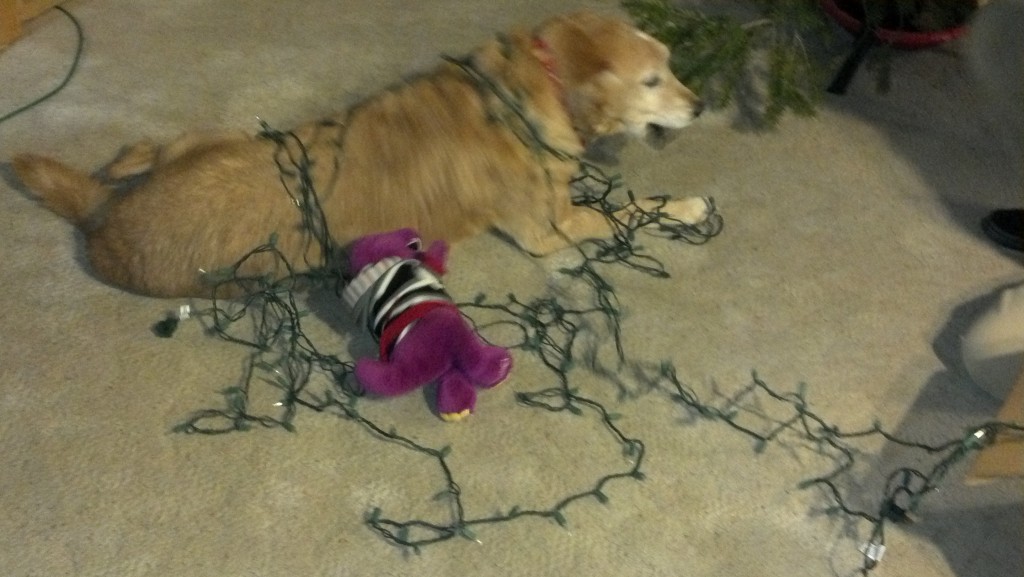 He finally got done decorating the tree and we let him take a nap. What a PITA this guy has been! 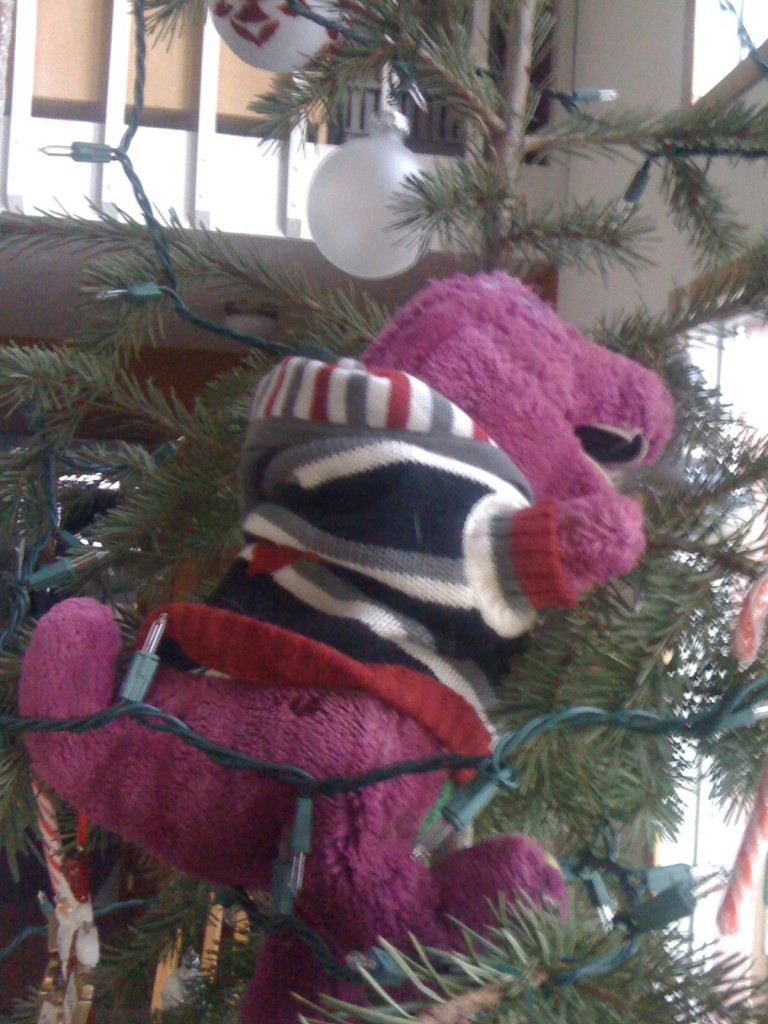 I think I may move out. My Woman has been way too distracted lately and she just told me tonight that we missed my 6-month ampuversary! Doggone it, that’s not right. She seems rather casual about it too. When she told me and I started to cry a little, she told me to buck up because I don’t have bone cancer. Like that makes it any better! So I had a different cancer, and I have a great chance of living till I’m old–big frickin’ deal, right? Am I right? Somebody give me an “amen!”

My ampuversary was on the 11th, for crying out loud! She missed it by almost two weeks! And now she’s reading over my shoulder and telling me to get over it. She says she has a lot on her mind. Honest-to-dog, I think she’s lost her bloody little mind. Weasel. I am not happy. Evelyn peed on the laundry room floor last night and I was disgusted, but now I’m thinking I’ll pay her to do it again. I can tolerate the odor if it’s for a good cause. What a b*tch. And I don’t mean Evelyn.

Well, to update anyone who cares (do you hear me, Woman?)–my big summer event was the posture-and-yowl fest at Wyatt’s place. I wrote about it, but it’s still the highlight of my summer. We did that Fort Collins shindig, followed by over the river and through the woods to Wyatt’s house. Criminy, what a ride. I got to watch Evelyn try to eat Wyatt. She is very embarrassing. Right now she’s eating a moth. Anyway, summer moved forward.  I had two different house sitters recently. Both involved men, which just ticks me off to no end. I do not like men, and the Woman knows that.

I really feel like I’m doing nothing but complaining, but this Woman has been so unsatisfactory lately. Sending men to babysit me. Okay, in all fairness, the one who babysat me in June was pretty decent. I did make him wait four days before I let him touch me, but that seemed fair. It was that or pee on the floor, and we already know I’m not the one that does that. This guy gave me shoulder and neck massages, and they were excellent. I did not want to let him know how blissful they made me, but he found out. He told the Woman, of course. He had some magic fingers. I think I even drooled.

So most of my summer has been spent sleeping (medicinal naps, Gayle) and watching chipmunks. I think they’re amusing. Evelyn wants to kill them, but I just think they’re silly. Besides, they get so worked up over the tiniest little things. And in a couple of months, it will snow here and they’ll lose their tiny little minds and I’ll be warm and cozy. So why should Evelyn care since she’ll be cozy, too? Well, I think maybe the chipmunks have bigger brains than Evelyn. Maybe that’s why.

Oh, and speaking of chipmunks, my Boy has this great idea! He has been telling the Woman he wants to make chipmunk jerky! Isn’t that the most awesome thing ever? I hope she lets him. She said something about it being disgusting and messy and not worth the trouble, but I think it’s fantastic! I’ll let you know if it happens. I know she’s taking him out tomorrow to get something called an “airsoft rifle,” and he said “jerky, here I come.” The Woman laughed so it might be a joke, but I’m going to check this out and stay hopeful. I have no idea what airsoft rifle means, but it might be fun. Or not, since it involves the Boy and he frequently scares the poo out of me. Not on purpose, you understand. I’m just a bit of a sissy.

I think I’m starting to ramble so that means I’m tired. It’s probably been at least 15 minutes since I got any sleep so I should definitely rest up. Evelyn is already snoring. My Woman is folding her laundry. My Boy is watching more ridiculous Japanese animation and laughing out loud. I think it turned out to be a pretty decent evening, even if they missed my big day. Oh well, maybe it is okay to act like I’m normal. Normal is fine, isn’t it? 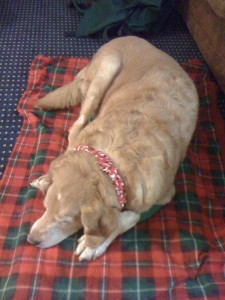 This is me. This is what I look like. I have always thought of myself as a Golden Retriever mix.

This is what I am, though. I am mostly these two things. I am stunned. 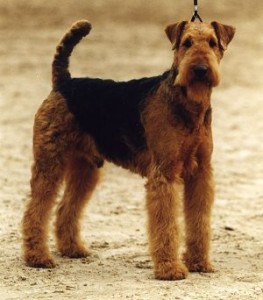 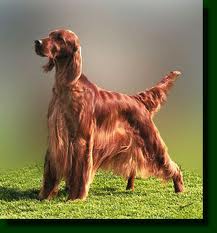 And then I am also some of these 2 guys, though not as much as the ones above: 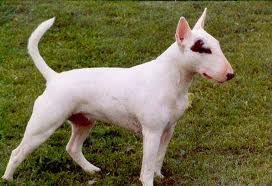 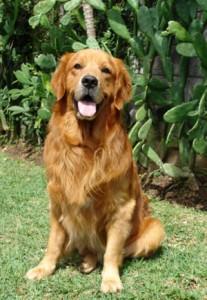 And then I’m a tiny bit of…this: 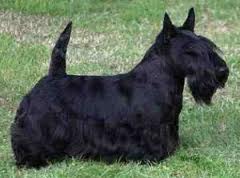 So my Woman is incredulous, whatever that means. She said that Irish Setters have a reputation for being cognitively challenged. I dunno what that means, either. She’s using big words.

The company my Woman used for my DNA test was BioPet. She picked them because they have the highest level of accuracy. They give their reports in levels. This is the way it works:

Level 1 means the breed listed represents over 75% of the DNA. That dog would probably have a purebred parent.

Level 2 means the breed listed represents 37-74% of the DNA.

Level 3 means the breed listed represents 20-36% of the DNA.

Level 4 means the breed listed represents 10-19% of the DNA.

Level 5 means the breed listed represents less than 10 % of the DNA.

So for me, it’s obvious that I am a true mutt! I have no Level 1 or 2 in me anywhere. The  highest level in my ancestry is Level 3. The majority of my DNA comes from an Airedale and and Irish Setter (both Level 3). Then the next-highest amount of my DNA comes from a Golden and a Bull Terrier (both Level 4). And then for spice, I have a tiny bit of a Scotty thrown in (Level 5). The testing company reminds us that we may look like a breed that isn’t very prevalent (like me looking mostly like a Golden), or we may look like a breed that isn’t even in our makeup. And as for behavior, well, I’m a mixed bag. Who the heck knows.

My test took about 10 days, and it was very exciting to get the results! My Woman said some interesting words when she saw the results, and I don’t know what those words mean, either–but it’s still nifty to see where I came from!

They don’t care I have 3 feet.

I think today they love me more

than the time when I had 4.

They bought me lots of brand new stuff;

A pretty quilt with lots of fluff,

Some squishy food that tastes so good,

An ugly shirt that has a hood.

I try to walk and then they help,

and now I hardly ever yelp

unless my sore place gets bumped hard,

or I fall down in my yard.

I love my family ’cause they love me.

They even clap when I go pee!

I show love daily without fail;

I say it when I wag my tail.